A sandwich-structured composite is a special class of composite materials that is fabricated by attaching two thin but stiff skins to a lightweight but thick core. The core material is normally low strength material, but its higher thickness provides the sandwich composite with high bending stiffness with overall low density. 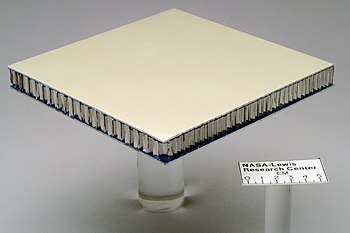 The core is bonded to the skins with an adhesive or with metal components by brazing together.

Diagram of an assembled composite sandwich (A), and its constituent face sheets or skins (B) and honeycomb core (C) (alternately: foam core)

A summary of the important developments in sandwich structures is given below.[1]

Metal composite material (MCM) is a type of sandwich formed from two thin skins of metal bonded to a plastic core in a continuous process under controlled pressure, heat, and tension.[3]

Recycled paper is also now being used over a closed-cell recycled kraft honeycomb core, creating a lightweight, strong, and fully repulpable composite board. This material is being used for applications including point-of-purchase displays, bulkheads, recyclable office furniture, exhibition stands, and wall dividers.

To fix different panels, among other solutions, a transition zone is normally used, which is a gradual reduction of the core height, until the two fiber skins are in touch. In this place, the fixation can be made by means of bolts, rivets, or adhesive.

The strength of the composite material is dependent largely on two factors:

The composite honeycomb structure of a helicopter nozzle

Sandwich theory[6][7] describes the behaviour of a beam, plate, or shell which consists of three layers - two face sheets and one core. The most commonly used sandwich theory is linear and is an extension of first order beam theory. Linear local buckling sandwich theory is of importance for the design and analysis of Sandwich plates or sandwich panels, which are of use in building construction, vehicle construction, airplane construction and refrigeration engineering.