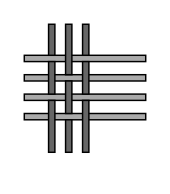 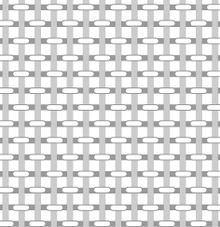 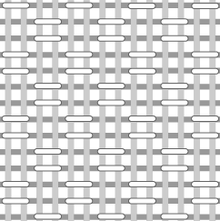 Plain weave (also called tabby weave, linen weave or taffeta weave) is the most basic of three fundamental types of textile weaves (along with satin weave and twill).[1] It is strong and hard-wearing, and is used for fashion and furnishing fabrics.

A balanced plain weave can be identified by its checkerboard-like appearance. It is also known as one-up-one-down weave or over and under pattern.[1]

Examples of fabric with plain weave are chiffon, organza, percale and taffeta.

According to the 12th-century geographer al-Idrīsī, the city of Almería in Andalusia manufactured imitations of Iraqi and Persian silks called ‘attābī, which David Jacoby identifies[4] as "a taffeta fabric made of silk and cotton (natural fibers) originally produced in Attabiya, a district of Baghdad." The word was adopted into Medieval Latin as attabi, then French as tabis and English as tabby, as in "tabby weave".[5][6]

Its uses range from heavy and coarse canvas and blankets made of thick yarns to the lightest and finest cambries and muslins made in extremely fine yarns.[7] Chiffon, organza, percale and taffeta are also plain weave fabrics.