The technique was developed by E. S. Watson and M. J. O'Neill in 1962,[1] and introduced commercially at the 1963 Pittsburgh Conference on Analytical Chemistry and Applied Spectroscopy. The first adiabatic differential scanning calorimeter that could be used in biochemistry was developed by P. L. Privalov and D. R. Monaselidze in 1964 at Institute of Physics in Tbilisi, Georgia.[2] The term DSC was coined to describe this instrument, which measures energy directly and allows precise measurements of heat capacity.[3]

With Heat-flux DSC, the changes in heat flow are calculated by integrating the ΔTref- curve. For this kind of experiment, a sample and a reference crucible are placed on a sample holder with integrated temperature sensors for temperature measurement of the crucibles. This arrangement is located in a temperature-controlled oven. Contrary to this classic design, the distinctive attribute of heat-flux DSC is the vertical configuration of planar temperature sensors surrounding a planar heater. This arrangement allows a very compact, lightweight and low heat capacitance structure with the full functionality of a DSC oven.[5]

For this kind of setup, also known as Power compensating DSC, the sample and reference crucible are placed in thermally insulated furnaces and not next to each other in the same furnace like in Heat-flux-DSC experiments. Then the temperature of both chambers is controlled so that the same temperature is always present on both sides. The electrical power that is required to obtain and maintain this state is then recorded rather than the temperature difference between the two crucibles.[6]

The 2000s have witnessed the rapid development of Fast-scan DSC (FSC),[7] a novel calorimetric technique that employs micromachined sensors. The key advances of this technique are the ultrahigh scanning rate, which can be as high as 106 K/s, and the ultrahigh sensitivity, with a heat capacity resolution typically better than 1 nJ/K.[8] Nanocalorimetry [9] has attracted much attention in materials science, where it is applied to perform quantitative analysis of rapid phase transitions, particularly on fast cooling. Another emerging area of application of FSC is physical chemistry, with a focus on the thermophysical properties of thermally labile compounds. Quantities like fusion temperature, fusion enthalpy, sublimation, and vaporization pressures, and enthalpies of such molecules became available.[10]

The basic principle underlying this technique is that when the sample undergoes a physical transformation such as phase transitions, more or less heat will need to flow to it than the reference to maintain both at the same temperature. Whether less or more heat must flow to the sample depends on whether the process is exothermic or endothermic. For example, as a solid sample melts to a liquid, it will require more heat flowing to the sample to increase its temperature at the same rate as the reference. This is due to the absorption of heat by the sample as it undergoes the endothermic phase transition from solid to liquid. Likewise, as the sample undergoes exothermic processes (such as crystallization) less heat is required to raise the sample temperature. By observing the difference in heat flow between the sample and reference, differential scanning calorimeters are able to measure the amount of heat absorbed or released during such transitions. DSC may also be used to observe more subtle physical changes, such as glass transitions. It is widely used in industrial settings as a quality control instrument due to its applicability in evaluating sample purity and for studying polymer curing.[11][12][13] 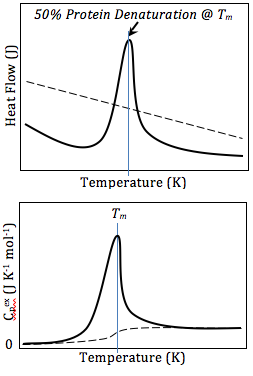 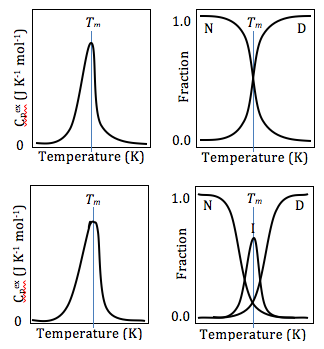 Normalized DSC curves using the baseline as the reference (left), and fractions of each conformational state (y) existing at each temperature (right), for two-state (top), and three-state (bottom) proteins. Note the minuscule broadening in the peak of the three-state protein's DSC curve, which may or may not appear statistically significant to the naked eye.

The result of a DSC experiment is a curve of heat flux versus temperature or versus time. There are two different conventions: exothermic reactions in the sample shown with a positive or negative peak, depending on the kind of technology used in the experiment. This curve can be used to calculate enthalpies of transitions. This is done by integrating the peak corresponding to a given transition. It can be shown that the enthalpy of transition can be expressed using the following equation:

is the enthalpy of transition,

is the calorimetric constant, and

is the area under the curve. The calorimetric constant will vary from instrument to instrument, and can be determined by analyzing a well-characterized sample with known enthalpies of transition.[12]

Differential scanning calorimetry can be used to measure a number of characteristic properties of a sample. Using this technique it is possible to observe fusion and crystallization events as well as glass transition temperatures Tg. DSC can also be used to study oxidation, as well as other chemical reactions.[11][12][14]

Glass transitions may occur as the temperature of an amorphous solid is increased. These transitions appear as a step in the baseline of the recorded DSC signal. This is due to the sample undergoing a change in heat capacity; no formal phase change occurs.[11][13]

As the temperature increases, an amorphous solid will become less viscous. At some point the molecules may obtain enough freedom of motion to spontaneously arrange themselves into a crystalline form. This is known as the crystallization temperature (Tc). This transition from amorphous solid to crystalline solid is an exothermic process, and results in a peak in the DSC signal. As the temperature increases the sample eventually reaches its melting temperature (Tm). The melting process results in an endothermic peak in the DSC curve. The ability to determine transition temperatures and enthalpies makes DSC a valuable tool in producing phase diagrams for various chemical systems.[11]

Differential scanning calorimetry can also be used to obtain valuable thermodynamics information about proteins. The thermodynamics analysis of proteins can reveal important information about the global structure of proteins, and protein/ligand interaction. For example, many mutations lower the stability of proteins, while ligand binding usually increases protein stability.[15] Using DSC, this stability can be measured by obtaining Gibbs Free Energy values at any given temperature. This allows researchers to compare the free energy of unfolding between ligand-free protein and protein-ligand complex, or wild type and mutant proteins. DSC can also be used in studying protein/lipid interactions, nucleotides, drug-lipid interactions.[16] In studying protein denaturation using DSC, the thermal melt should be at least to some degree reversible, as the thermodynamics calculations rely on chemical equlibrium.[16]

The technique is widely used across a range of applications, both as a routine quality test and as a research tool. The equipment is easy to calibrate, using low melting indium at 156.5985 °C for example, and is a rapid and reliable method of thermal analysis.[citation needed] 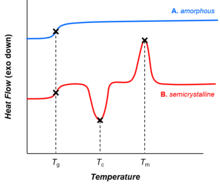 The percent crystalline content of a polymer can be estimated from the crystallization/melting peaks of the DSC graph using reference heats of fusion found in the literature.[17] DSC can also be used to study thermal degradation of polymers using an approach such as Oxidative Onset Temperature/Time (OOT); however, the user risks contamination of the DSC cell, which can be problematic. Thermogravimetric Analysis (TGA) may be more useful for decomposition behavior determination. Impurities in polymers can be determined by examining thermograms for anomalous peaks, and plasticisers can be detected at their characteristic boiling points. In addition, examination of minor events in first heat thermal analysis data can be useful as these apparently "anomalous peaks" can in fact also be representative of process or storage thermal history of the material or polymer physical aging. Comparison of first and second heat data collected at consistent heating rates can allow the analyst to learn about both polymer processing history and material properties.[citation needed]

Using differential scanning calorimetry to study the stability to oxidation of samples generally requires an airtight sample chamber. It can be used to determine the oxidative-induction time (OIT) of a sample. Such tests are usually done isothermally (at constant temperature) by changing the atmosphere of the sample. First, the sample is brought to the desired test temperature under an inert atmosphere, usually nitrogen. Then, oxygen is added to the system. Any oxidation that occurs is observed as a deviation in the baseline. Such analysis can be used to determine the stability and optimum storage conditions for a material or compound.[11]

DSC makes a reasonable initial safety screening tool. In this mode the sample will be housed in a non-reactive crucible (often gold or gold-plated steel), and which will be able to withstand pressure (typically up to 100 bar). The presence of an exothermic event can then be used to assess the stability of a substance to heat. However, due to a combination of relatively poor sensitivity, slower than normal scan rates (typically 2–3 °C/min, due to much heavier crucible) and unknown activation energy, it is necessary to deduct about 75–100 °C from the initial start of the observed exotherm to suggest a maximal temperature for the material. A much more accurate data set can be obtained from an adiabatic calorimeter, but such a test may take 2–3 days from ambient at a rate of a 3 °C increment per half-hour.[citation needed]

DSC is widely used in the pharmaceutical and polymer industries. For the polymer chemist, DSC is a handy tool for studying curing processes, which allows the fine tuning of polymer properties. The cross-linking of polymer molecules that occurs in the curing process is exothermic, resulting in a negative peak in the DSC curve that usually appears soon after the glass transition.[11][12][13]

In the pharmaceutical industry it is necessary to have well-characterized drug compounds in order to define processing parameters. For instance, if it is necessary to deliver a drug in the amorphous form, it is desirable to process the drug at temperatures below those at which crystallization can occur.[12]

Freezing-point depression can be used as a purity analysis tool when analysed by differential scanning calorimetry. This is possible because the temperature range over which a mixture of compounds melts is dependent on their relative amounts. Consequently, less pure compounds will exhibit a broadened melting peak that begins at lower temperature than a pure compound.[12][13]