▪ Slight increase in positive expectations for the future

This is the fourteenth time that Composites Germany has identified the latest KPIs for the fibre-reinforced plastics market. The survey covered all the member companies of the three major umbrella organisations of Composites Germany: AVK, Composites United and the VDMA Working Group on Hybrid Lightweight Construction Technologies.

As before, to ensure a smooth comparison with the previous surveys, the questions in this half-yearly survey have been left unchanged. Once again, the data obtained in the survey was largely qualitative and related to current and future market developments.

The assessment of the prevailing business situation produced rather restrained results in the last few surveys, and this trend is continuing. Respondents in all three regions under review continue to give negative assessments of the general business situation. Ratings have reached the lowest figures since the surveys were started in January 2013 (see Fig.1).

In total, for example, 37% of respondents describe the general business situation in Germany as rather or very negative. In the previous survey this figure was only 26% (see Fig.2). This shows a sustained lack of optimism about the general market environment.

These rather subdued expectations also tend to prevail among respondents assessing their own business situations. About one third of respondents, for instance, describe the situations of their own companies as rather negative or even very negative. The ratings display only minor differences in the various regions (Germany, Europe and worldwide).

Slight increase in positive expectations for the future

Figure 3: Rating of the future own business situation

In contrast to this slightly optimistic view, indicators for the investment situation display a downward tendency. For example, only 29% of respondents are expecting their companies to increase their involvement in composites. In the previous survey, on the other hand, this value was still 37%. Over 60% of respondents are expecting their involvement to continue at the same level.

Likewise, the proportion of respondents expecting to see redundancies at their companies has risen from 8% to more than 20%.

The last market survey already showed that respondents believed that the most important growth stimuli in the composites segment should be coming from Asia as a global region. This trend is now continuing. Looking at the number of mentions, Europe and Germany have even lost some ground to Asia.

There has been a major shift in terms of materials. Whereas, in the past, respondents always believed that the composites segment would receive its prevailing growth stimuli from the CRP environment, the current survey is the first to show respondents mentioning GRP as the most important material (see Fig. 4). 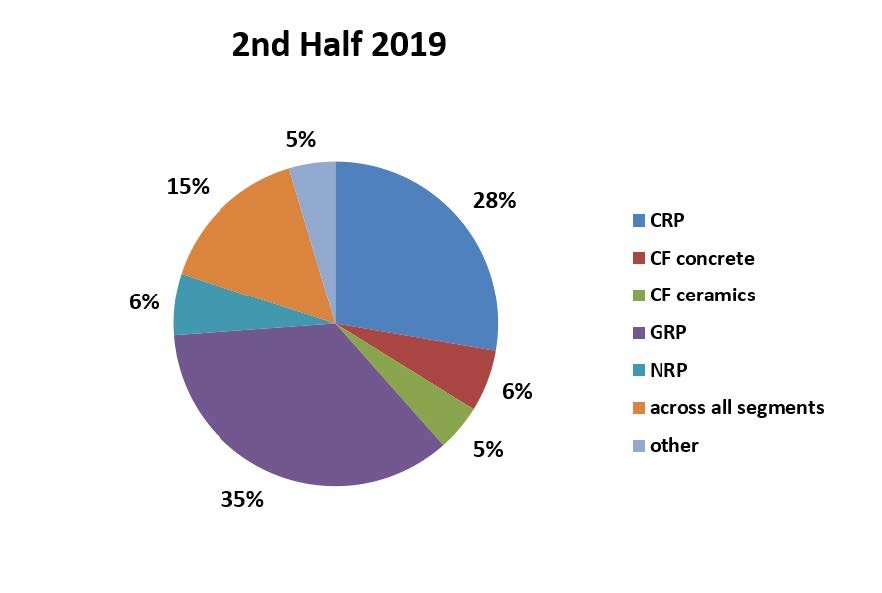 However, when we look at the ratings in detail, for instance the above-mentioned view of the current business situation, nearly two thirds of respondents are still regarding the situation as positive. So, although there has been a slight downward trend, the situation cannot be assessed as fundamentally negative.

The sustained weakening of the index, particularly concerning the assessment of current situation and the market environment, should nevertheless be taken very seriously, as it continues to show a high level of dissatisfaction across various business locations and regions – a development that appears to be gaining momentum. It seems that, so far, there has not been any success in gaining a positive influence on the economic environment within the highly international composites market at the political level.

The production and processing of composites has been heavily impacted by various negative macro-economic developments, such as Brexit, US customs policies, trade disputes among leading economic powers and industrial nations, as well as, more recently, trade restrictions with China and a major slowdown in economic growth, etc. One area that is particularly marked by enormous upheaval and uncertainties is mobility. It remains to be hoped that the economy will generally calm down or that there will perhaps be developments in other – possibly up-and-coming – economic segments, causing an improvement in the market environment. At any rate, respondents are somewhat more optimistic about the future again.

The next Composites Market Survey will be published in July/August 2020.